Ian A Anderson recounts how the popular area of Bristol up on the hill got its name back in 1970. Or a rare tale of how disreputable folk musicians increased property prices! OK, so it was all his fault…

In late 1960s Bristol, the area now called ‘Clifton Village’ was fairly run down and bohemian. Those grand Georgian flats along Royal York Crescent, very cold and damp in those pre-central heating days, could be rented cheaply and many housed impoverished students, artists, writers or musicians. Now celebrated feminist author Angela Carter and her then husband lived on RYC, and I recall a theatrical family along there in whose flat I encountered a young, up-and-coming Tom Stoppard.

Car parking wasn’t a problem, the shops were unremarkable (the old Victorian Arcade hadn’t been rediscovered and re-opened), estate agents weren’t thriving. There were none of the range of fashionable cafés that you’ll find today, other than a friendly coffee house called Splinters tucked in the corner of an unloved small concrete shopping precinct that also housed a WH Smiths, now a derelict, boarded up eyesore.

Andy Leggett’s 1970 visualisation of ‘Clifton Village’, which was adapted as the background for Village Thing Records labels. © Andy Leggett. 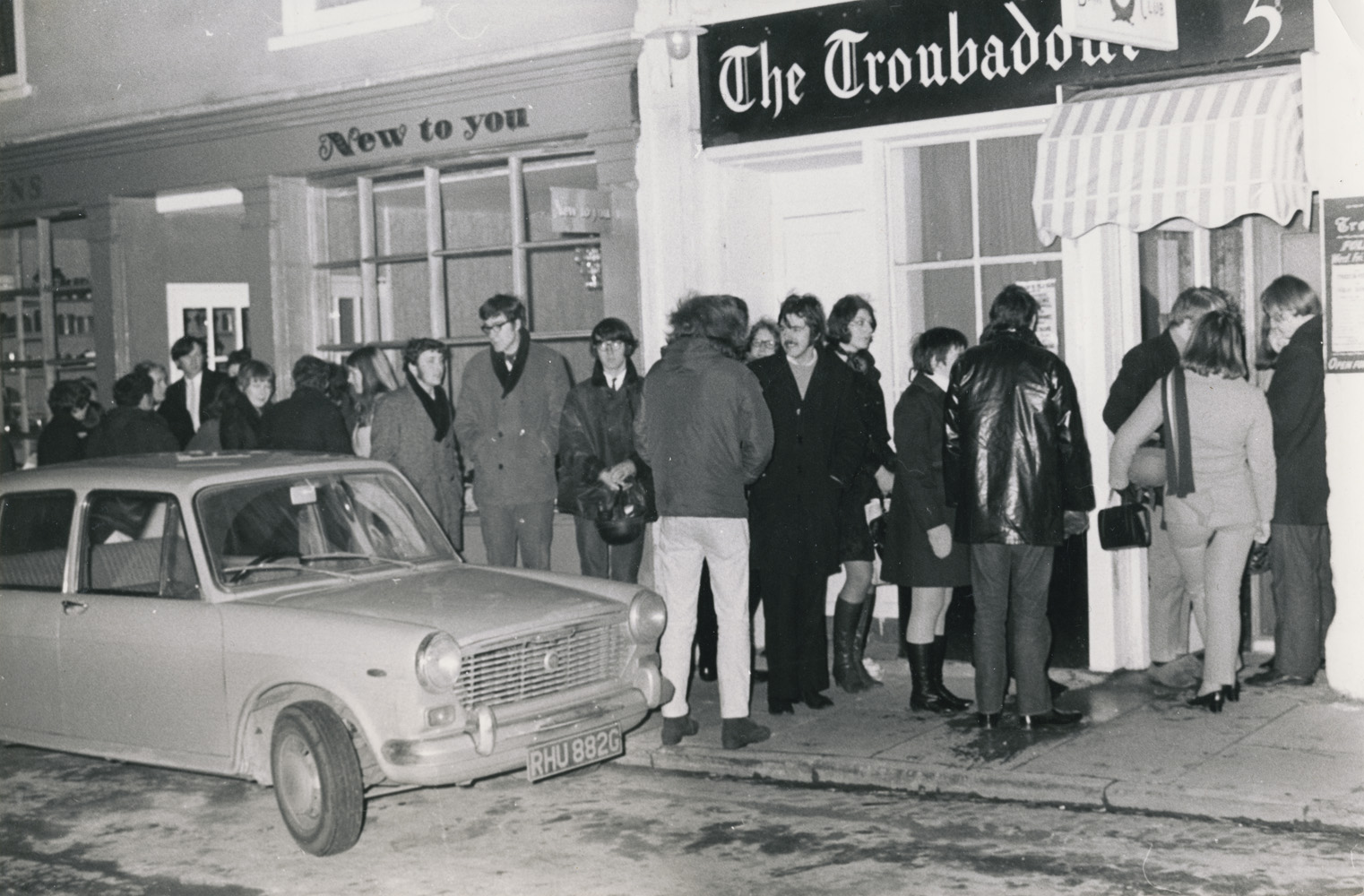 But if you turned into Princess Victoria Street on an early evening, you might be startled. A queue, mostly of student age, could snake out of Waterloo Street, around the corner and into the Mall. They were there for the legendary Bristol Troubadour folk club, which had opened in 1966. I’d played there on the opening night, and became a regular.

Nobody looking at the building now ­– not even those of us who went there often and in my case even lived briefly in the flat upstairs – can work out how the tiny premises at 5 Waterloo Street, now occupied by Atkinson’s Health & Beauty Clinic, can possibly have held what it did. Even allowing for the fact that ‘Health & Safety’ hadn’t been invented. Read its story here.

In 1969, the Troubadour’s founders sold up and returned to Australia. The venue was bought by a local nightclub owner who had bigger financial expectations than it could deliver. The resident artists, newly installed manager John Turner (later of BBC Bristol) and the fiercely loyal audience battled to keep it going until it was closed abruptly a couple of years later.

Returning from time away in London over the winter of 1968/’69 where I’d been in a losing battle with major record companies, I’d moved into a spare room in the flat above the club where John lived, as had fellow musician Al Jones. We’d got into the habit of wandering over to nearby Clifton Down Road for late breakfasts at Splinters, where the ‘business’ of the day would get discussed. 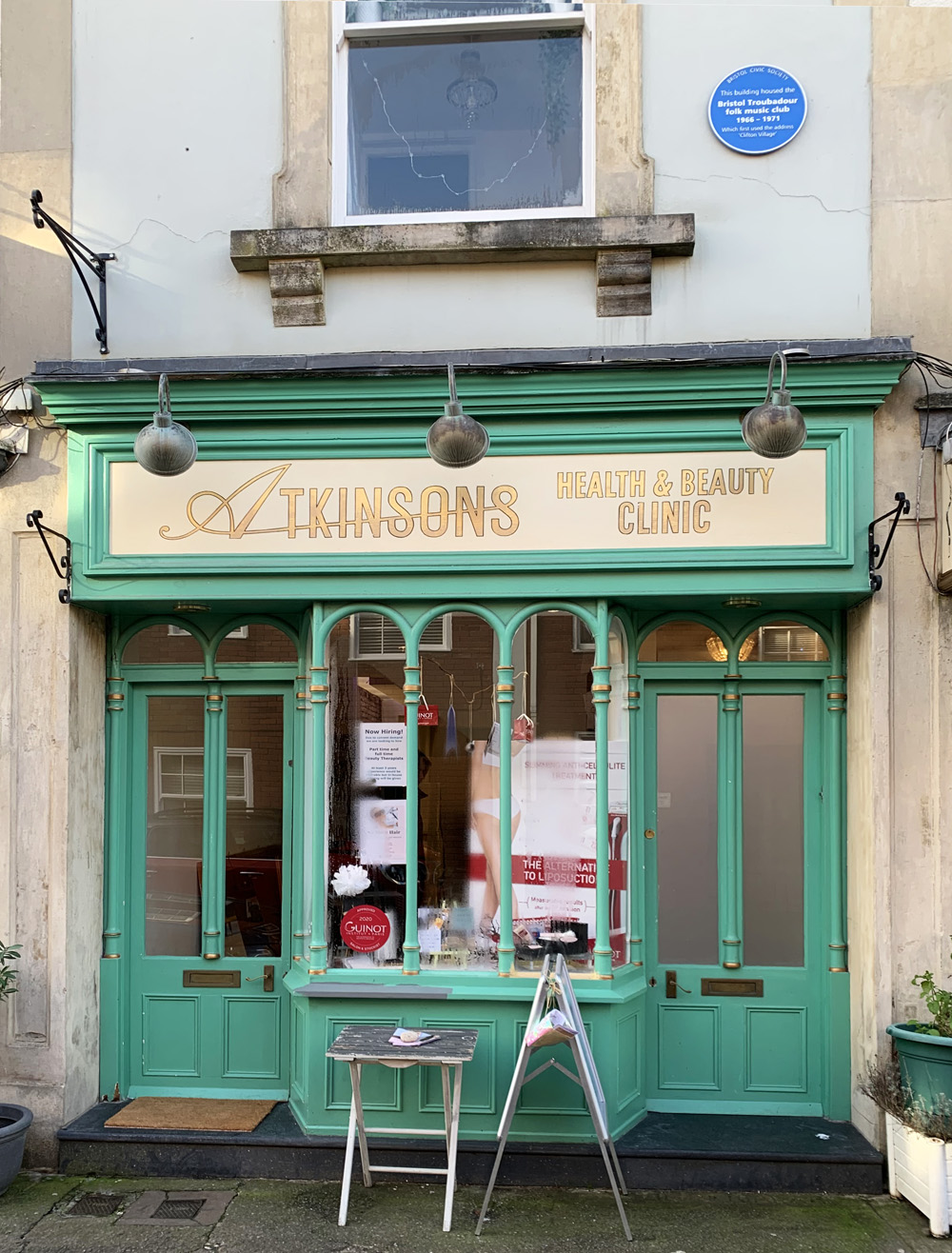 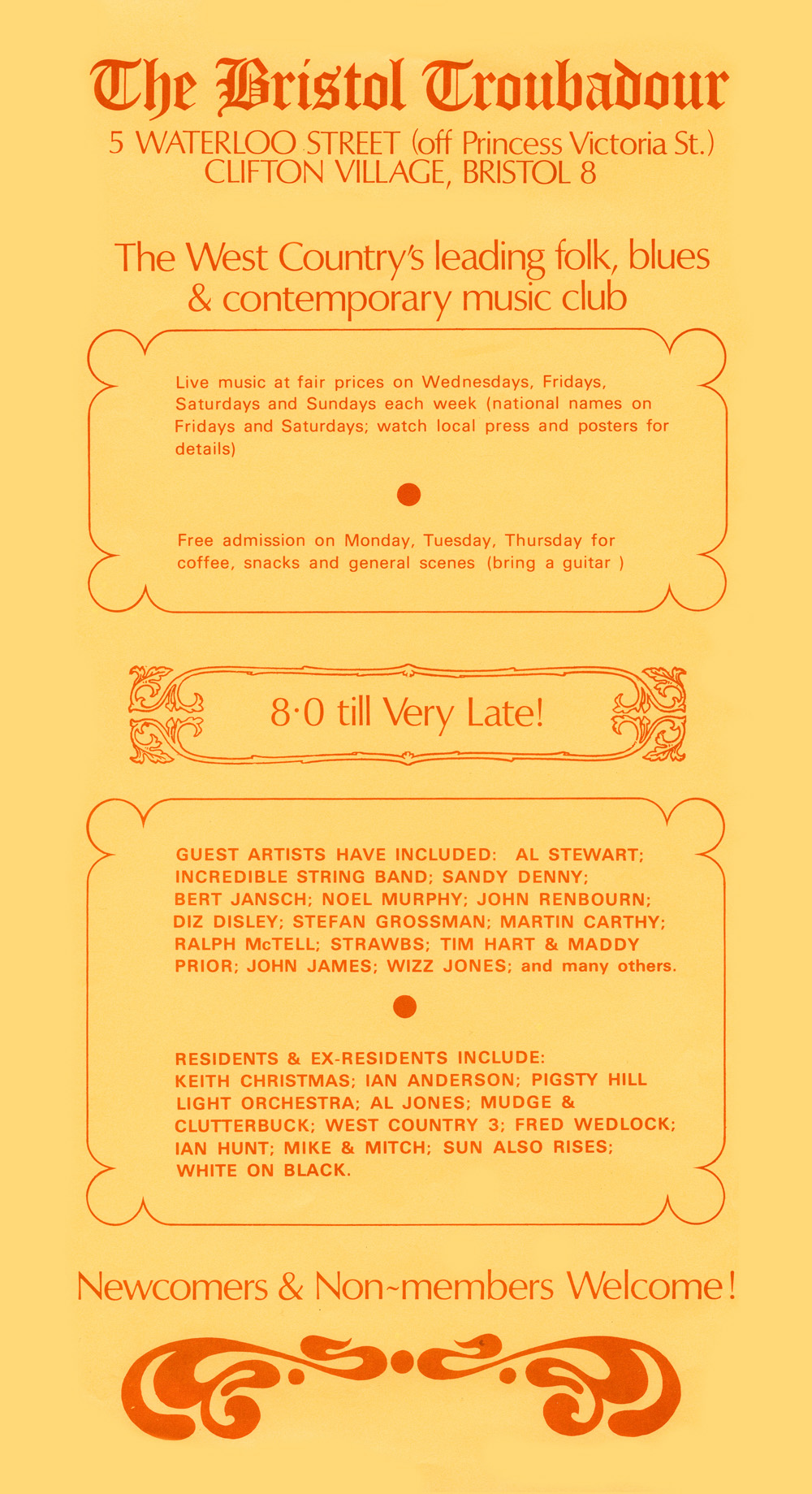 In early 1970, what was on our mind was producing a smart, generic poster for the Troubadour that could be distributed around Bristol, hopefully to boost its turnover and so satisfy the new owner. So John, myself and possibly Al too were sat in Splinters, scoffing coffee and Sally Lunn teacakes, brainstorming some copy text for it. I had a lightbulb moment about echoing the famous beatnik Greenwich Village folk scene in New York from whence the 1960s commercial folk boom, Bob Dylan et al, had originated, and came up with the idea of putting the address as Clifton Village. It seemed cute… So either Rodney Matthews or Terry Brace of local graphic design/ rock music promoters Plastic Dog designed it up and got it printed.

The poster went out widely in Bristol at the time, and from then on the club always used the Clifton Village address in its event advertising and communications. It turns out – and people have carefully researched this – that the term had never been used before this, in print anyway. Yes, when greater Clifton was built in Georgian and Victorian times it expanded on what had been a small village outside of Bristol city, but it seems to have only have ever been called, straightforwardly, Clifton. 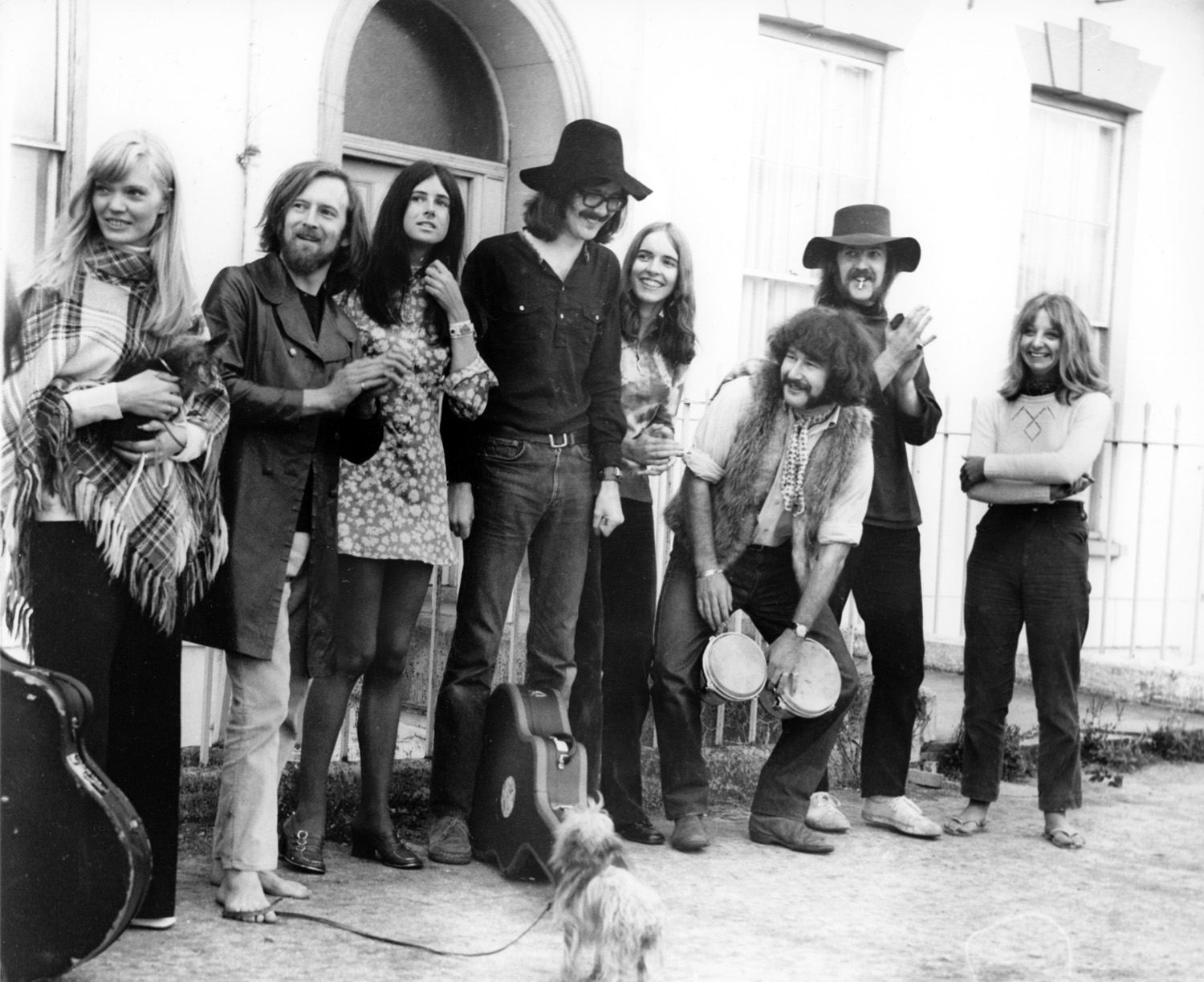 Troubadour regulars, 1970. The men in hats are Ian A Anderson (centre) and John Turner (to the right). Photo by Jo Gedrych. Andy Leggett who painted the illustration that heads this piece is second left. Ian Turner, the hirsute man crouching with bongoes, was naturally known as “Heavy Drummer”.

In 1973, after the Troubadour had closed, I moved away. In 1980 – although I wasn’t aware of it at the time – Michael Pascoe’s The Clifton Guide (Redcliffe Press) mentioned that “Today the term Clifton Village is often used to describe the heart of Clifton. It has been dismissed as an estate agent’s term, but there is more than a grain of truth in the description. Local resident’s societies… have joined together in several projects including the enormously successful Clifton Village Fayres of 1978 and 1979.”

It wasn’t until I moved back a decade ago that I discovered how the term had become ubiquitous. Quite a surprise! It was so-named on road signs, printed maps, bus routes, numerous business names and eventually an actual residents’ parking zone. You couldn’t look in a local estate agent’s without seeing references to it, and that it was “desirable” and “sought after”!

A surviving copy of that original Troubadour poster has been lodged with Bristol’s M-Shed Museum who used it as part of a recent major exhibition on the history of music in Bristol since the 1950s, and in 2016 Bristol Civic Society acknowledged the role that the club had played in naming the area when they granted a blue plaque for the Waterloo Street premises marking the 50th anniversary of its opening.

A few years ago there was an ‘open house’ day on Royal York Crescent and one could go and visit an elderly lady (now sadly passed away) who had lived there since the 1930s, and hear all sorts of fascinating anecdotes about the history of the area. I asked her when she thought it had started being called Clifton Village and she said that it was definitely not until the 1970s, and how she too assumed that it had been cooked up by estate agents. When I told her the Troubadour poster story, she emphatically said, without prompting, that it would absolutely explain the derivation  – that the Troubadour was so widely known in the day as one of the most popular venues in the area. 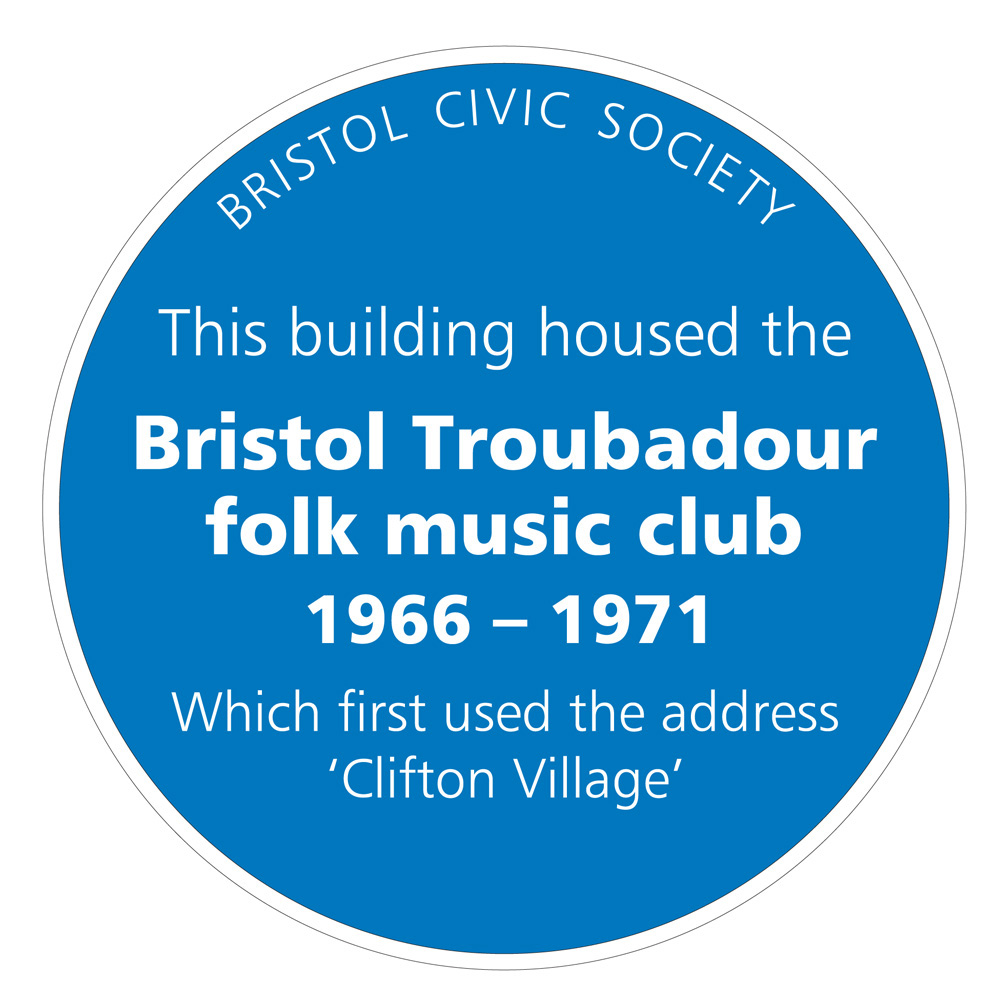 The Bristol Civic Society blue plaque added to the building in 2016, acknowledging its role in creating the Clifton Village name for the area.

If only I’d had 1/4 of a % royalty point from the increases in property values that have derived from my idea down the years, I’d probably be very rich! In the early 1970s you could buy a whole town house, all four floors, on Royal York Crescent for 10 grand. Nowadays, all split into flats, you’d get little change out of £2.5 million. A rare, probably unique example of disreputable folk musicians pushing up property prices!

Oh, and a footnote. A few months later in 1970 we decided to start a folk record label which went on to become quite a cult imprint – some of the couple of dozen LPs which we released from 1970-74 can now fetch several hundred quid each. So once again we’d been sat in Splinters brainstorming a name for the label . . . and the Clifton Village idea came round again, so maybe it could be the Village, er . . . something? Ah, Village Thing! It was initially based in the courtyard flat at 12A Royal York Crescent, though I doubt if it’ll ever get another blue plaque (but Angela Carter’s flat at 38 probably ought to)!

Author Ian Anderson’s 1970 album Royal York Crescent, was one of the first releases on the Village Thing label.