They say a picture is worth a thousand words. This one gets nearly that many from Ian Anderson. (Based on a feature in fRoots 313, July 2009) 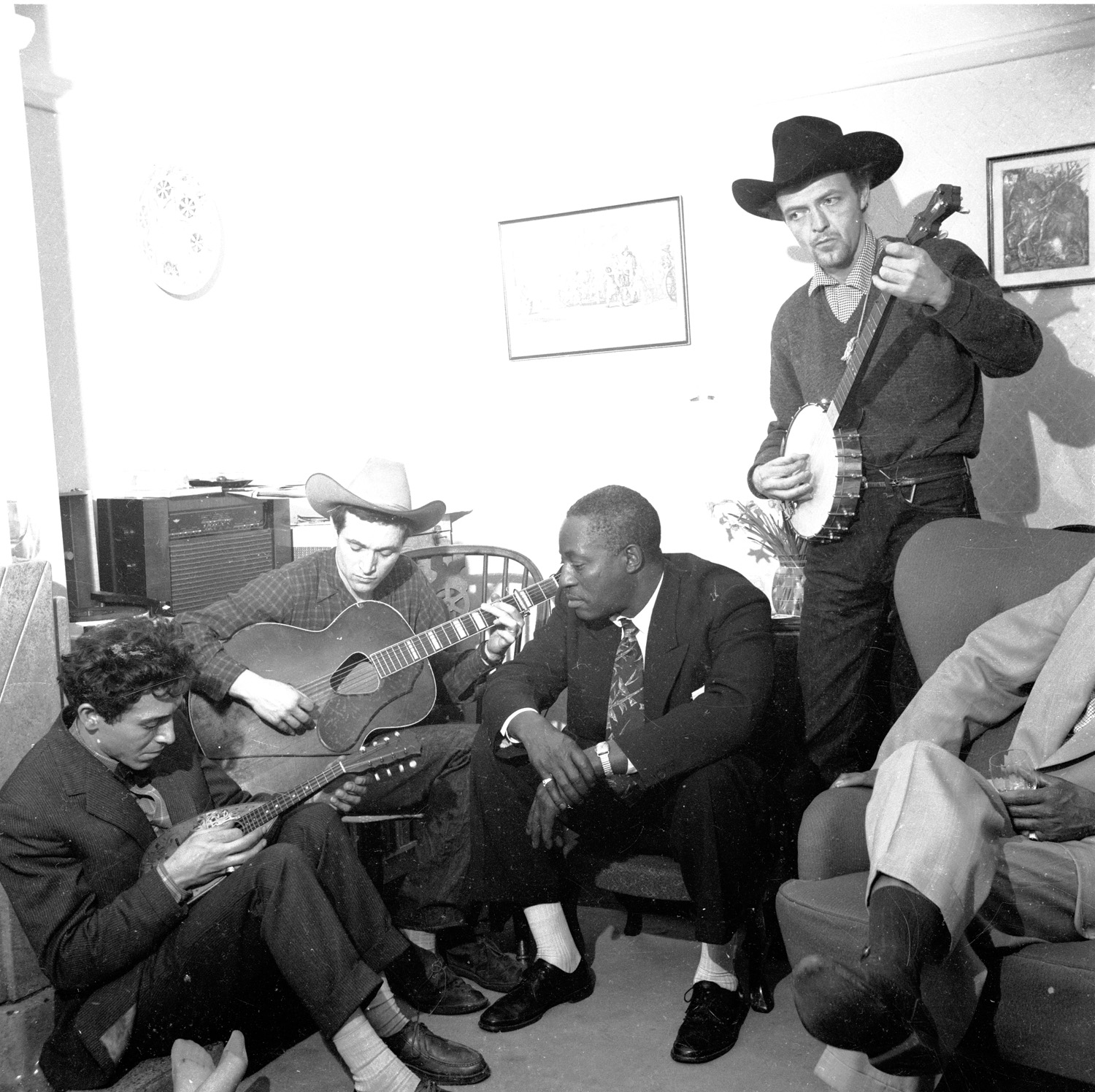 I first spotted the photo above on Wizz Jones’ website. Wizz put me in touch with the source, Dave Bennett (of the Bennett Brothers, legends of the early ’60s Paris busking scene), who kindly supplied scans of it and others. It turned out that they’d been taken by venerated blues writer Paul Oliver in 1957, some like the one above probably in Alexis Korner’s flat, others in Paul’s.

So I’m looking at this picture and it’s slowly dawning on me how much stems from this group of people, both personally and in terms of the scene in general. Without this quartet, the UK roots music scene we know today simply would not exist.

For example, I’ve been asked what I know about the influences that made up the classic Martin Carthy/ Nic Jones school of English folk guitar playing, and wonder how many current players realise that there’s a point in history where it all begins to coalesce but not from the source you might imagine. Those visiting Americans from such different backgrounds – Big Bill Broonzy and Ramblin’ Jack Elliott – became massive role models for English players. People like Davy Graham, Wizz Jones and Martin Carthy all saw them live and were influenced by one or both. Martin always says the Broonzy thumb is an element of his style. Wizz definitely got the thumb from Big Bill and the flat picking from Jack. Wizz in turn was a big influence, along with Davy, on Bert Jansch and John Renbourn. Martin influenced Nic Jones, as did Bert. And the catalyst who made it all happen back then was the late lamented Alexis Korner, who I still miss very much.

Alexis was a classic ‘without whom’ person. A tireless activist for the blues from the 1950s through to his untimely death on New Year’s Day 1984, he was a writer, broadcaster and promoter as well as a musician. Numerous artists and bands – notably the Rolling Stones – owed Alexis for their first breaks. In my case he catalysed the release of and wrote the notes for the Muddy Waters EP that absolutely literally changed my life. Then in the mid-1960s he became my friend and mentor as a musician: I will never forget his encouragement, actual help and welcoming home near where I was living in a Notting Hill bedsit in the winter of ‘68/’69.

Rambling Jack Elliott was a larger than life character who inspired many musicians on his visits to the UK at that time, becoming a role model for British musicians like Wizz Jones and Scottish folk singer Alex Campbell who took to the busking street haunts of Paris in his wake. Perhaps even more importantly, he was a seminal influence on a young guy in the USA who’d recently changed his name to Bob Dylan – and just think what effect that guy had on kickstarting a whole other music scene over here!

Banjo player Derroll Adams, who came over to Europe at Jack’s suggestion and never returned to the States, was another massive influence – people like Donovan, Rod Stewart, Long John Baldry and the Small Faces’ Ronnie Lane all idolised him and his song Portland Town became an anthem of the anti-war movement. After recovering from near death through alcoholism, nursed by his wonderful young Belgian wife Danny, he made a great return in the early 1970s and by that time I was running the Village Thing label in Bristol. I was privileged to produce his Feelin’ Fine comeback album, with Wizz Jones among the supporting musicians, and later still to be invited to play on one of his European releases. Being able to do that sort of thing was a real confidence boost for later times and projects.

And Big Bill Broonzy! He was the first ‘real’ bluesman that many English musicians had seen – before my time, unfortunately. He had legendary status and as mentioned above, numerous British players like Davy Graham, Wizz Jones and Martin Carthy (not to mention the likes of Eric Clapton) who went on to become models themselves, all learned from him, in some cases literally at his feet. Somewhere down in Weston-super-Mare a local folk hero guitarist known as Beetle had the Broonzy thumb down to a T, and when I first got a guitar, that’s who I learned from. The folk process rolled on.

I was still in short trousers when this picture was taken, completely oblivious to the existence of any of this music. But by the time I’d heard that Muddy Waters EP and as a direct result discovered folk, blues, jazz, African music and beyond with the art school beatniks in a Weston-super-Mare coffee bar, spent a summer clearing restaurant tables to buy my first guitar, and got to tentatively banging and twanging in the back room of the pub across the road, the influence of these four people had changed the world, particularly mine.

By then I’d decided that music was, by hook or by crook, what I wanted to be involved in. Little did I know that it would save me from getting a proper job and instead give me a life of performing, recording, broadcasting, writing, producing, promoting, travelling and self-education. Certainly I couldn’t have imagined, already a music magazine junkie, that I’d end up running one of my own for 40 years, 425 issues of fRoots, or form friendships with some of these legends that I was beginning to discover. All of that is, to put it bluntly, their fault!

So let your eyes linger on this photo. The more you do, the more you think. It’s amazing what starts right here. It gives me goose pimples! 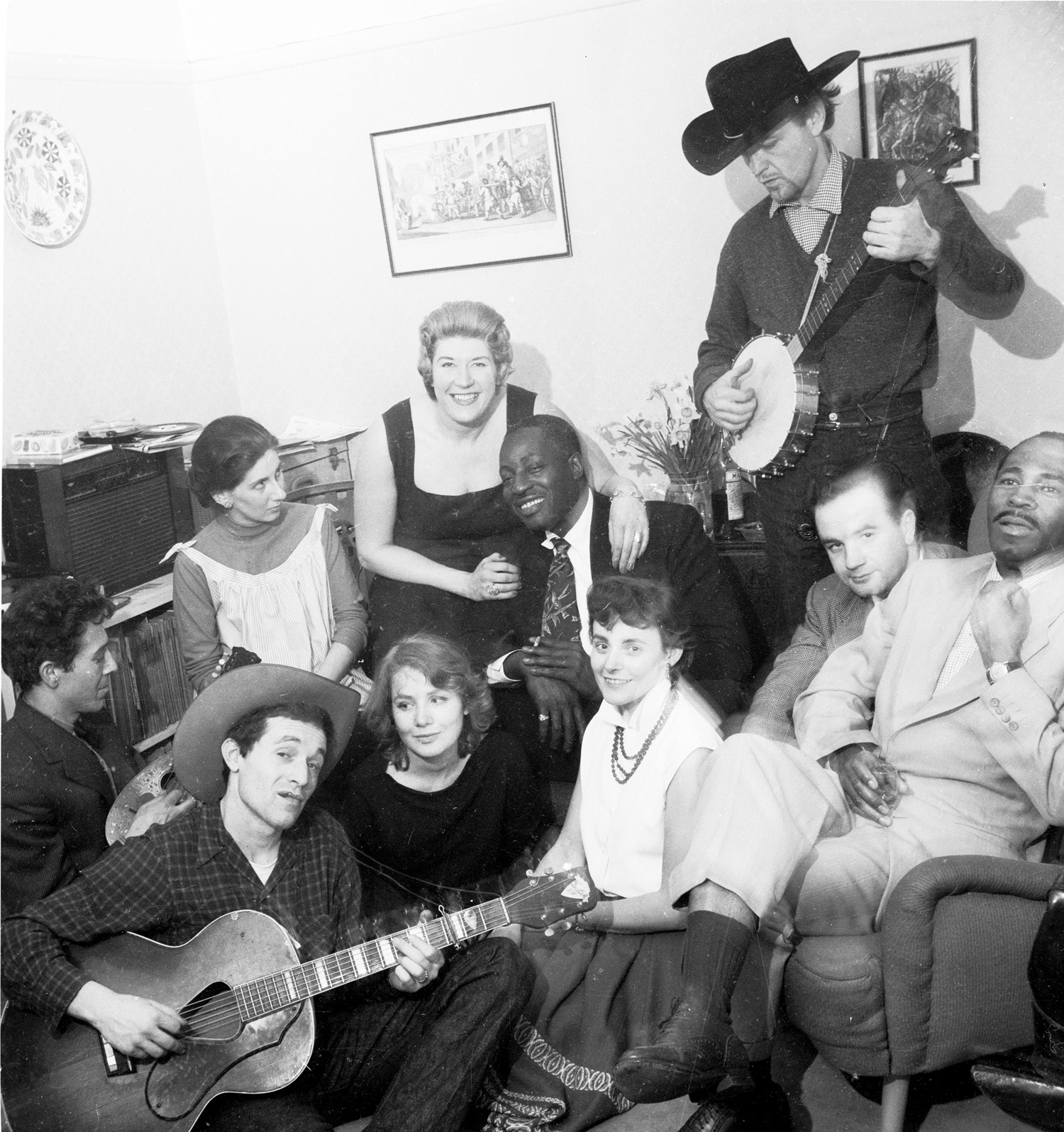